A passenger train slowly rocks to a stop in the heat of a lazy Florida afternoon. The train takes on water for its passengers, who have stepped down into a nearby field to stretch and gather pineapples growing beside the tracks. As the passengers refresh themselves, it is impossible to ignore the hum of life teaming around them. The air has the fragrant scent of sea mist and flowers. A short while later, the bell sounds on the train alerting passengers to their impending departure. Reluctantly, the travelers return to the train, glancing back at the peaceful and bountiful terrain. This scene was undoubtedly repeated many times in the early 1900s as trains passed through the burgeoning settlement later to be named the City of Deerfield Beach.

The Citys history begins in 1877, when the first non-native glimpsed at the swamps, dense vines, saw palmetto, wild fig trees, cabbage palms, and pine groves along Hillsboro River which empties into the Atlantic. To the south, Key West and Miami were flourishing villages. To the north, Palm Beach was gaining renown as a fashionable winter resort. By 1890, a few houses appeared along the meandering Hillsboro River, which was named after the Earl of Hillsborough who was granted this land by King George III of England in the late eighteenth century. By the spring of 1896, Henry M. Flagler had extended his Florida East Coast Railroad down the coastline into Miami. The railroad opened up the tropical wilderness, pressing parallel against the Atlantic shore, which until then had been inhabited primarily by local fauna and Seminole Indians who lived inland.

On June 22, 1898, a post office was established at Deerfield, Florida to serve a population of 20 settlers. It is said this name was chosen because of the numerous deer that grazed along the Hillsboro River. This river formed the northern boundary of Deerfield. A narrow wooden bridge crossed the stream west of the railroad, leading to another blossoming settlement: Boca Raton. 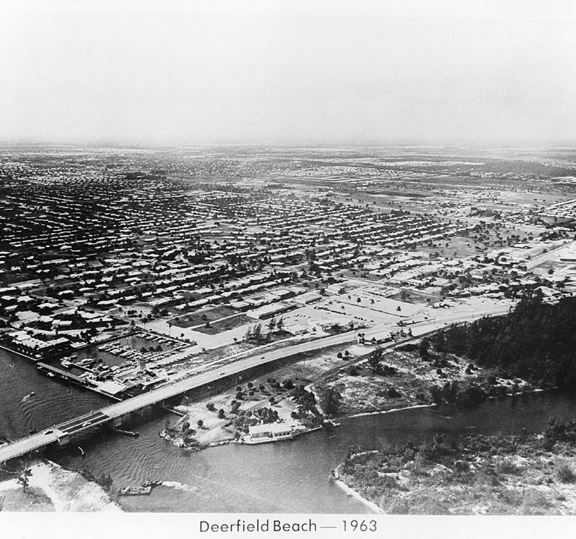 The intersection of today's Hillsboro Boulevard and Dixie Highway was the focus of Deerfields businesses in 1910. Dixie Highway was only a nine-foot wide dirt trail. The community was home to four or five stores, a lodge, the post office, and the Australian and the Pioneer Hotels. But the key to the economy of the village lay at the produce shed adjacent to the railway depot. The farmers brought their vegetables and fruits there for shipment north. Deerfield tomatoes were ranked among the finest harvested in the state. The depot doubled as a site for civic activities. In 1911, the Hillsboro River was dredged and became the Hillsboro Canal, linking Deerfield to Lake Okeechobee 45 miles to the northwest.> 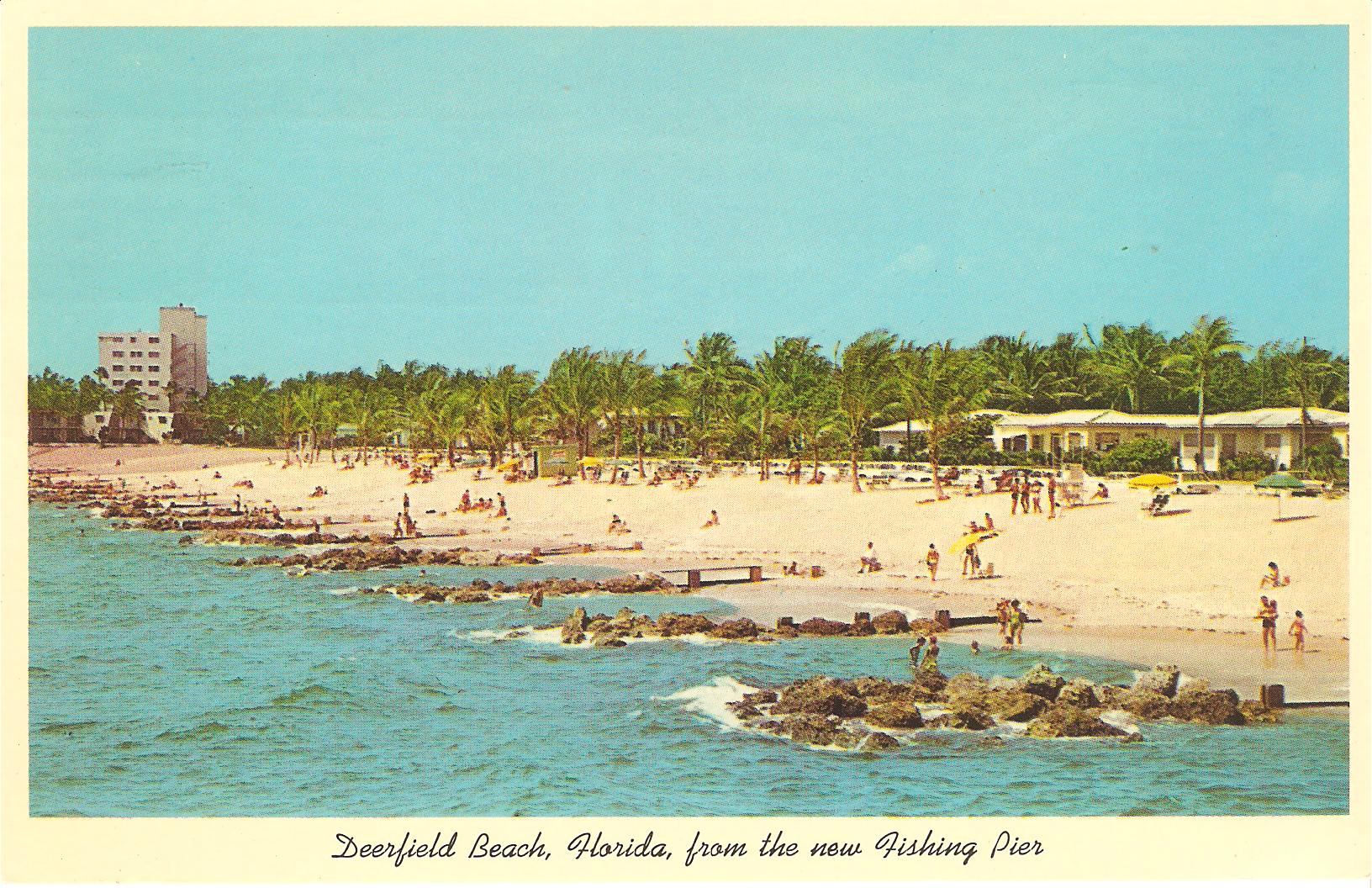 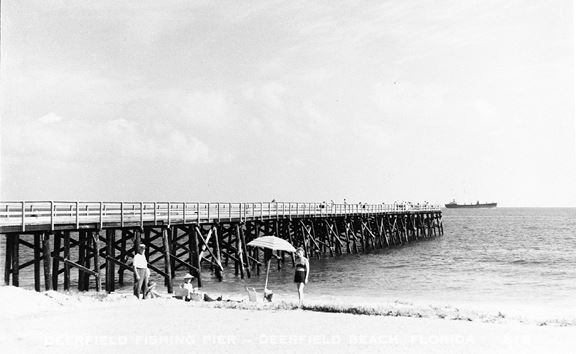 The Town of Deerfield was incorporated on June 11, 1925. George Emory Butler, Jr. was elected as the first mayor. 1925 also saw the opening of the first public library, which was serving a population that had climbed to 1,300 residents. In 1939, the name of the town was changed to Deerfield Beach and the population numbered about 1,800.

Although primarily an agricultural community until the late 1940s, after WWII tourists began to discover Deerfields scenic oceanfront. The burgeoning tourism industry was evidenced by the new proliferation of hotels and motels along the shoreline.

1947 marked the formation of one of Deerfield's most influential civic organizations, the Lions Club. Its first project was establishing Pioneer Park along the banks of the Hillsboro Canal. The Lions cleared the scrub growth and fashioned a picnic area and a baseball diamond complete with stands and barbecue pits. The park has been expanded since to include recreational buildings, boat ramps and lighted tennis courts. To raise funds, the club held several chicken and rib barbecues. The fund-raiser became so popular that it became an annual celebration, now known as Founders' Day.

In 1951 the town name was changed to the City of Deerfield Beach. The economy gradually continued to evolve away from agriculture toward tourism. Now the economy is heavily diversified and includes distribution, manufacturing, and office industries in addition to tourism. The sustained year-round population of over 50,000 evidences the strength of the local economy. The City is host to the Women's Professional Volleyball Association Tour and Superboat Power Race and features great recreational programs and green space. The City of Deerfield Beach provides customer-oriented services, which create a quality of life that, encourages residents and employers to enjoy South Florida and prosper in an ever-growing international economy. 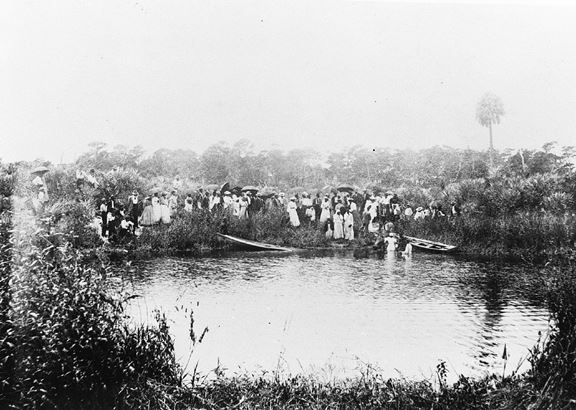